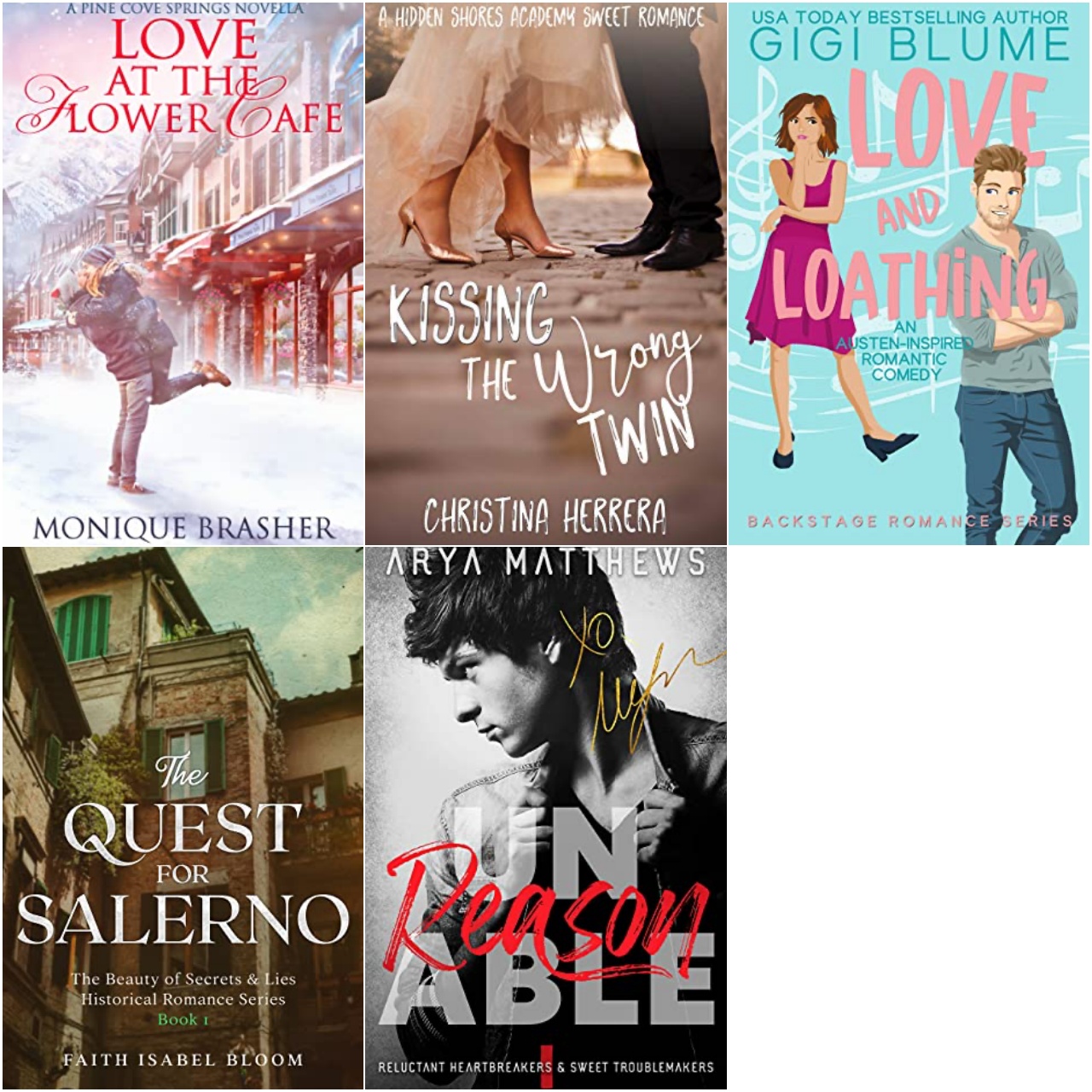 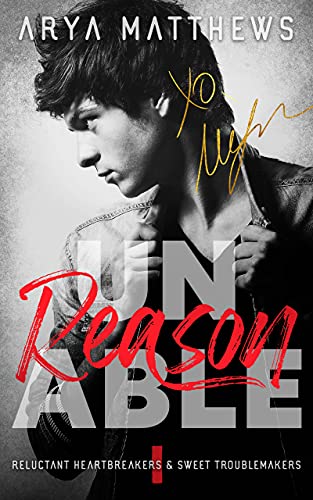 There are many who dream of fame. Many more dream of Marshall Jones, Project Viper’s irresistible frontman. Alexandra gets a shot at both, millions of admirers and the hotshot singer’s heart, but nothing ever comes for free. She loses everything to land a spot with Project Viper as their new bassist— Hold it. Alexandra’s a singer who’s never held a bass guitar in her life. Alone and reeling from a tragedy that altered her whole life, she’s desperate for a fresh start and a new family. Mastering the bass and impressing five hardcore rockers, all in only six months, is doable. Really. And it’s okay that Marshall absolutely hates her. No big deal at all. Only it is. Of course it is. Marshall’s sultry green eyes and brooding, reluctant curiosity ignite heart-stopping sparks whenever their glances collide. But sparks won’t stop Marshall from forcing Alexandra out of his band family. She’s inexperienced, maddening, hair black as midnight, lips sweet as— Whatever she is, for the good of Project Viper, Alexandra must leave. If he has to break her heart to make her gone, so be it. The joke’s on him though. There’s nothing left to break, and Alexandra’s left with no other choice than to aim for the impossible—tame the unreasonable singer and win her place with the band. 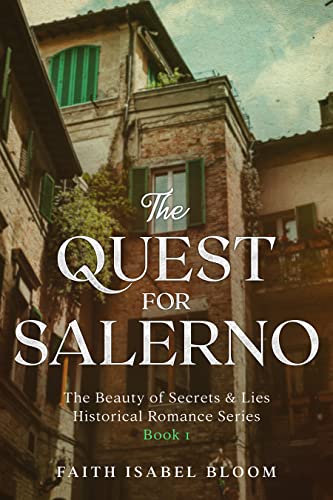 The Quest For Salerno by Faith Isabel Bloom

Sophia is a wife and mother, living a mundane and ordinary life in her home in Richmond-upon-Thames. But all that changes in an instant when she uncovers a wartime mystery surrounding her great aunt Lily. Through a journal, a series of letters, and old photos, all meticulously kept by Lily during World War Two, Sophia discovers that her aunt was in love with an Italian man, Luigi Leoni, from whom she was separated due to the conflict. As the letters and journal grow in intensity and her frustration mounts at being kept from the man she loves through a series of misfortunes, Sophia sees Lily’s chances of happiness gradually slip away until she is left with nothing. Now, decades on, Sophia makes the decision to travel to Salerno Province Italy, in a bid to unravel the secret, guilt, or even murder, that has remained hidden for many years and finally allow the ashes of a much-loved aunt to return to the place she cherished the most. But with a difficult husband objecting to her decision and intent on selling a family property to the highest bidder, Sophia must make a choice not just about her aunt’s precious dream, but of her own happiness too. 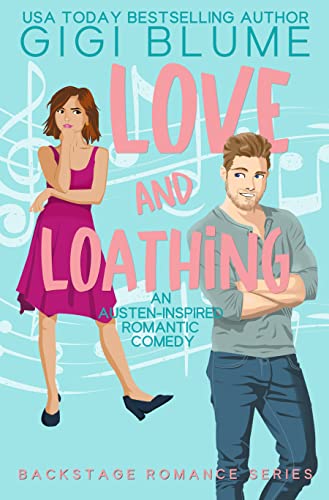 Love and Loathing by Gigi Blume

It’s not easy to hate the hottest star in hollywood but somebody’s got to do it. Beth: Why do I hate Will Darcy? How much time do you have? There was that day he basically insulted my acting. And then there’s the way he… exists. Plus, he’s infuriatingly arrogant, wholly unbearable, and drop-dead gorgeous. I mean, the magazines think he’s gorgeous. Not me. Definitely not me. I hate his pretty face, his action hero arms, and his annoying kisses. Oh. Did I forget to mention that? Don’t get too hot and bothered, it’s just for the stage. He’s cast as The Pirate King and I’m the unlucky maiden who he flings over his muscular shoulder. It’s a tough job. But even through Will hates my guts, his eyes tell another story. The way he looks at me sends a warm flutter down my belly. And since I swore to loathe him for all eternity, falling for him would be an extreme inconvenience. What’s a girl to do? Will: I’m only doing this musical as a favor to a friend, and I certainly could do without the distraction from Beth Bennet—even if she invades my daydreams like an over-zealous photo bomber. The way she spars with me and gets under my skin… it’s dangerous. I need to keep my head down, finish this play, and get back to my action movies. Except I’m starting to wonder if that’s what I really want. Not only has this sassy pixie taken residence in my head, she redecorated and I can’t find anything. What is this torment? Even my dog prefers her. I wonder what would happen if I stop fighting this attraction brewing inside me? And when the curtain falls and the lights dim, how will I know if this on-stage romance is nothing more than just a fantastic performance? 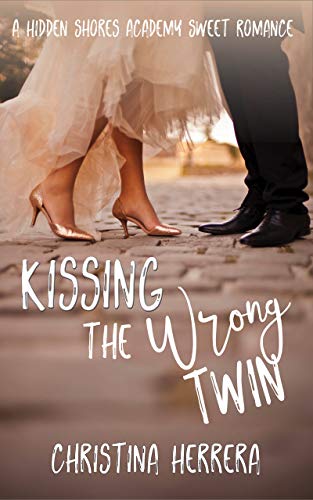 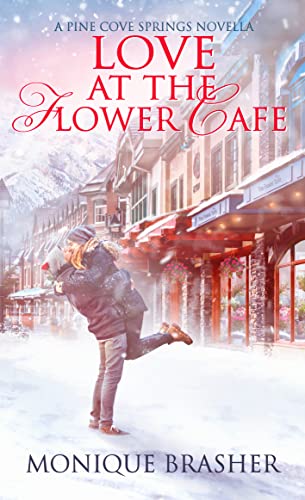 Love at the Flower Cafe by Monique Brasher

Getting a job providing flowers for a smash hit reality dating show was the plan. Falling for the bachelor, my brother’s best friend, wasn’t. When I was offered the opportunity for my flower cafe to be the go-to for the florals on the set of Love in a Small Town, I jumped at the chance for life-changing exposure for my small business. I just never expected to be cast as a contestant at the last minute, competing for the heart of Flynn Jackson, the person I’d always wanted but could never have. It should’ve been simple: play the part for a little while, get sent home, and reap the benefits. Yet from the moment I fall out of the sleigh and into his arms, it’s anything but. I’m a small town florist, he’s a famous snowboarding athlete. We’re from two different worlds, obvious from the moment I walk into the Inn on the first night. But old feelings resurface, and he’s always everywhere with that charm and sexy smolder. I can’t escape him. The more time we spend together, the harder it is to keep the secrets that could cost me everything I’ve worked for. Especially after he pulls me aside, and tells me the one thing I never expected: he’s got feelings for me too.