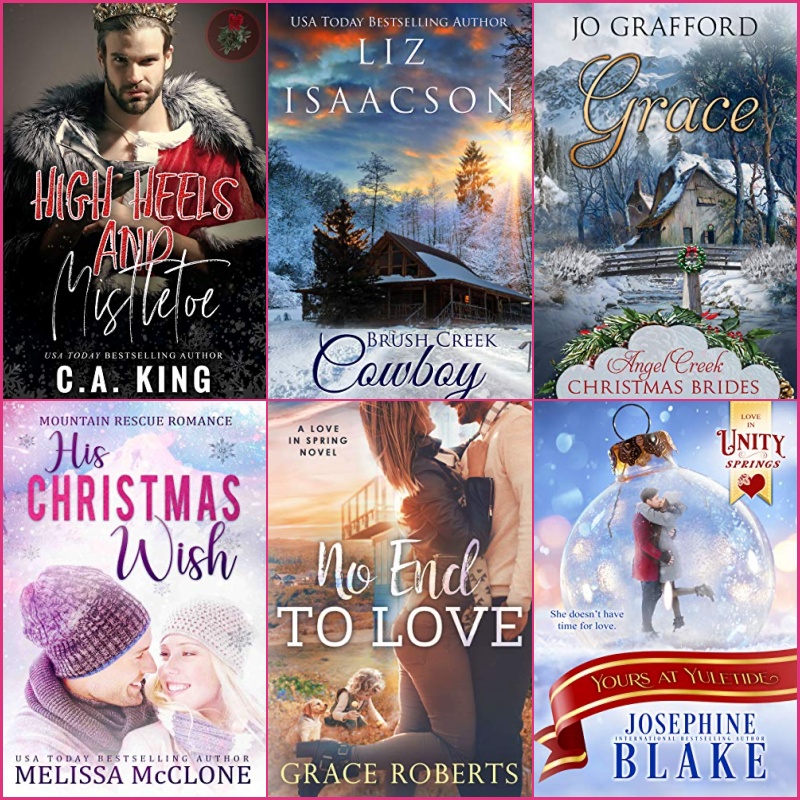 Coming home for the holidays was never supposed to mean falling in love.

Charlotte Wilson is in her very last semester of college. Distractions are completely out of the question, which is what makes everything about Oliver Hull a very bad idea. The local firefighter is so far out of Charlotte’s league that he should be classified as a different species. Handsome, charming, and dangerously persistent, Oliver is everything Charlotte cannot handle right now.

The small town of Unity Springs is overflowing with Christmas Spirit, and Oliver’s work at the fire station is keeping him more than busy. Then along comes Charlotte Wilson, and Oliver’s aspirations fall to the wayside in his pursuit of just. One. More. Kiss.

When tragedy strikes, Oliver and Charlotte’s budding relationship is put to an unexpected test. Why does Charlotte keep running away from everything that makes her heart glow? Love and happiness are within her grasp. Is she strong enough to reach out and take it?

They thought they’d closed the door to love, but it came knocking anyway.

Ellie Hawthorne lost her faith in love when trusting the wrong man cost her a job she loved and her reputation both as a woman and a teacher. So when she inherits her grandmother’s beach cottage in Spring Harbor, Oregon, she’s happy to leave the city and the gossip behind, and finally put down roots—without a man.

Adam Cavanagh lost his faith in love when his wife died in his arms, leaving him with their six-month-old daughter and a broken heart he knew he could never stitch back together. Three years later, his only goal is to be the best dad he can—without a woman.

When Adam moves in next door to Ellie, they’re determined to be nothing more than friendly neighbors and safeguard their hearts. But as their lives entangle and feelings get involved, can they get over their fears and open their hearts to love?

A sweet, single dad romance for fans of heartwarming stories and small-town settings. No End To Love is the first book in the Love In Spring series, but it can be read on its own.

Distraught and grief-stricken over the deaths of her fiancé and brother, she left Hood Hamlet and her Christmas spirit behind, to start over somewhere new. But now, six years later, her family needs her. Carly returns home to face her past and give her niece and nephew the best Christmas ever.

Burdened with guilt, Jake Porter believes he could have saved his two friends on that fateful day and kept Carly from experiencing such a heart-wrenching loss. When she arrives in town, Jake wants to make amends so they can both finally move forward with their lives.

As Jake helps Carly experience the magic of Christmas so she’ll embrace the holiday again, will he also be able to open her heart to something else she’d given up on…love?

A long-lost soldier, a sister of the woman he was once engaged to, and the merry mischief of a Christmas matchmaker…

Grace Byrd has been in love with Lieutenant Charley Arrington for as long as she can remember, but he barely notices her existence when her oldest sister, Elizabeth, is around. Grace’s heart is shattered when he goes missing in action and is presumed dead. She silently vows to live out her days as a spinster, because she cannot imagine ever giving her heart to another man.

Now he’s back in their lives — returned from a southern hospital where he suffered of amnesia for months. Ready to claim her oldest sister’s hand in marriage at long last, he quickly learns Elizabeth has become a mail-order bride in his absence to help out with her family’s failing finances. What’s more, she’s fallen in love with her new husband.

Is this Grace’s second chance to win the heart of the man she loves? Can Charley move beyond his old dreams and replace them with new ones? One-click this sweet, small town romance to find out…and be whisked away by the hope and healing of the holidays!

He’s a cowboy raising his son alone. She’s a widow with a chocolate obsession. Can Brush Creek cowboy Walker get over his losses and fears in order to build a future with Tess?

Former rodeo champion and cowboy Walker Thompson trains horses at Brush Creek Horse Ranch, where he lives a simple life in his cabin with his ten-year-old son, Michael.

He’s worked with Tess Wagner, a widow who came to Brush Creek to escape the turmoil of her life to give her seven-year-old son, Graham, a slower pace of life. Together, they run a cotton candy stand at the town’s Heritage Festival every fall, and Walker gets up the nerve to ask Tess to dinner.

Neither of them wants to inflict more sorrow and suffering on the other than they’ve already endured. So when Tess confesses that her breast cancer has flared up again, Walker backs off. Way off.

He’ll have to decide if he’d rather spend even a short time with Tess and Graham than not have them in his life at all. Tess wants to feel God’s love and power, but she’ll have to discover and accept God’s will in order to find her happy ending. Can Walker and Tess make a family with their sons, the horses, and a lot of chocolate?

Call it an allergy or a family curse, either way it boiled down to the same problem: Julietta Romero couldn’t go within six feet of mistletoe.

Forty-eight weeks, from January to the beginning of December, were spent filling the position as a top executive at a prestigious marketing firm–a five-year running record without a single incident. As long as she continued taking all her vacation hours all at the same time, nothing would change. Then, the worst scenario happened: with only a handful of days left before her flight, she found herself working round the clock on the firm’s biggest deal yet, and her boss wasn’t letting her leave until it was signed, sealed, and delivered.

Luke Winslow was in love with women, parties, and the holidays, and not necessarily in that order. Taking over one of his father’s companies didn’t fit into any of his plans, nor did a relationship that lasted longer than a roll in the sheets. There wasn’t a single person who had made him want to settle down and be serious, that was until she fell into his arms… several times. Now, he’ll do anything possible to stop her from escaping his charms, including holding off putting his John Hancock on the business deal his father instructed him to close.

It’s up to the magic of the season to bring this unlikely couple together with a little help from a pair of High Heels and Mistletoe.