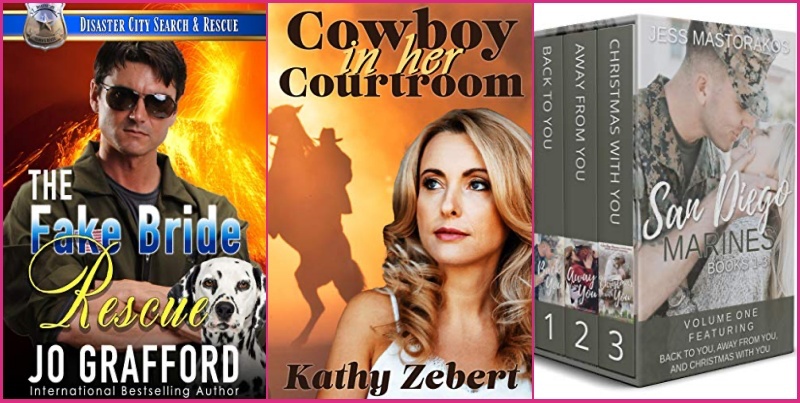 Fall in love with Hawk, Mills, and Cooper in the first three full-length books of the San Diego Marines series.

Book One – Back to You: A Sweet, Friends to Lovers, Military Romance

He’s ready to protect his country, but protecting his heart is a little more complicated.

United States Marine Spencer Hawkins doesn’t do relationships. Not even with his best friend Ellie Burton, the girl who has always been there for him, even in his darkest hour. As he starts his journey as a new Marine, Ellie doesn’t hesitate to support his dream, even if she’s struggling to find her own. But after one kiss changes their relationship forever, can they ever go back to just being friends?

Book Two – Away from You: A Sweet, Second Chance, Military Romance

This kind of love deserves a second chance.

Lance Corporal Matthew Mills leaves his wife after returning home from his first deployment with PTSD. Six months later, a week in the woods at Big Bear Lake promises relaxation and fun with friends. Without the pressures of the outside world, Olivia hopes she can convince him that their love is worth fighting for. And as much as it scares him, Matt can’t help but want to let her.

Fake-dating a gorgeous Marine at Christmas should be a no-brainer for Angie. Too bad he drives her nuts.

When Staff Sergeant Charles Cooper made up a fake girlfriend to appease his grandmother, he hadn’t counted on Grandma Jean flying halfway across the country to meet her at Christmas. Angie Black agrees to the deal only because she could use a fake boyfriend for her own reasons. Their arrangement seems to solve both of their problems. That is, until unexpected feelings arise. With his deployment looming, will they figure out that they’re meant to be before they find themselves half a world apart?

A romantic cowboy. A sunset kiss. Everything is perfect until he’s charged with murder.

Callie Fletcher just wanted to sit on the terrace of her favorite hot spot and watch the sunset over the Texas Hill Country. A table for one, a glass of pinot and the best view in Austin. When Dominic Jaxson, a gorgeous, wealthy cowboy, charms her into sharing the view, the sunset gets even more magical.

Months of sunsets later, their affection blooms into love, with dreams of a future together. Never does Callie imagine that this caring and tender man might hide a secret or that he might be a criminal. But then he walks through the doors of her courtroom, charged with a crime.

As a court reporter, Callie knows her way around the legal system, and she’s certain Dominic isn’t guilty. But can she uncover the clues to prove his innocence, or have she and her handsome cowboy shared their last Texas sunset?

Cowboy in Her Courtroom (previously published as Incredulity) is the first in a fast-paced, clean romantic suspense series.

It’s supposed to be a weekend of fun and relaxation, until their fake relationship is threatened by a fire. All of a sudden, the feelings they’ve kept hidden become all too real.

Firefighter Ransom Keller can’t stand the thought of attending his twenty-year high school reunion as a single guy. Folks tend to expect a little more action in the romance department from a former star linebacker and an ex party machine. But a decade in the Special Forces followed by career in fire rescue operations hasn’t left him much time to play Romeo. So he does the unthinkable — he hires an actress to pose as his bride for the weekend.

Serena Chandler is supposed to be working on her doctoral dissertation, not filling in for her bestie’s slightly scandalous rent-a-date service. However, her short-term “husband” seems like a perfect gentleman, so she relaxes and decides to enjoy their weekend trip together while keeping things strictly professional between them. He’s made it clear he’s a no strings attached kind of man, and that’s fine with her.

Their carefully negotiated agreement works right up to the point when a fire breaks out at his alma mater, and she becomes trapped in the gym. Watching the ripped and ready Ransom take charge in a daring rescue operation, however, makes all her best-laid plans go up in smoke. She finds herself scheming with her Mensa-level I.Q. for a way to turn their fake marriage into a real one.

If they survive the fire, of course!