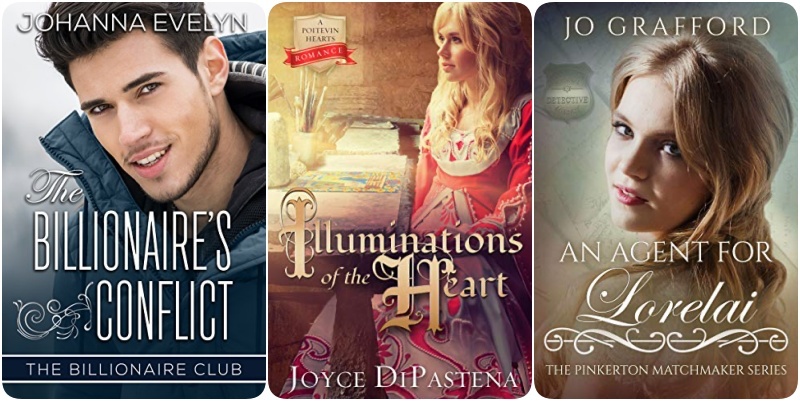 Lorelai Woods believes she’s engaged to the perfect man and living the perfect life, until she discovers he is part of a cattle rustling gang. In a desperate bid to regain control of her family’s ranch that the gang has commandeered, she signs on as a Pinkerton Agent, only to discover she’ll be required to marry a fellow agent (at least temporarily) before being allowed to launch an investigation into the case.

Pressed into the hard life of sailing on a pirate ship, John Langston quickly grows bored with his new vocation as a farmer once he is freed. A happenstance glance at an advert for Pinkerton Agents has him jumping at the opportunity to juggle adventure and danger once again. He doesn’t count on falling in love with the woman he’s sent to protect, and he hates the fact that his undercover assignment requires him to keep so many secrets from her.

To make matters worse, he receives orders to marry a new female agent…and discovers the ravishing Lorelai Woods has been keeping a few secrets of her own!

When Siri de Calendri’s brother dies, his will sends her from Venice and the medieval illuminating workshop she loves to the faraway county of Poitou. Siri becomes the ward of her brother’s friend, Triston de Brielle, but she does not intend to stay that way. She is determined to find employment as an illuminator in this strange land—until Triston unexpectedly snatches her heart away with a kiss.

Triston is a man of quiet honor and courage, but the guilt he carries for the death of his wife, Clothilde, has left him numb and hesitant to love again. Worse yet, Siri bears an uncanny resemblance to his lost love. Or does she? Her merry laughter and twinkling eyes are very different from his late wife’s shy smiles and quiet ways. Yet when he gazes into Siri’s face, all he sees is Clothilde.

Then Triston’s past returns to threaten them both. Trapped between the rivalry of the king’s sons on the one hand and a neighbor out for vengeance on the other, Triston knows it would be safer to send Siri away. But Siri is determined not to be cast off and not to live in another woman’s shadow. She has illuminated many a priceless book with pen and paint, but can her own vibrant spirit illuminate the darkness in Triston’s soul and make his heart beat for her alone?

Sometimes promises should be broken and love can be lost.

Anna Lynn had been the one bright spot in Marks dark childhood, but her memory was intertwined with pain. Mark vowed to walk away from his billion dollar legacy and start his own life free from the chains of his late father—until Deanna moved to town and Anna Lynn’s deception was brought to light. Deanna was his only hope of moving on and getting that fresh start, but with plans of living happily ever after shattered by her sudden death, a complicated choice lies before him. Go back to his original intentions of leaving everything behind and lose all he has worked to build, or marry a woman he hasn’t thought of since the tenth grade.

Even after he ditched her without word or reason, Anna Lynn doesn’t hesitate when Mark asks her to marry him—after all, she’s loved him since she could remember. But after the wedding, she realizes going back will be harder than she thought. Her honeymoon in Montana helps her come to terms with the fact that sometimes promises should be broken and love can be lost.