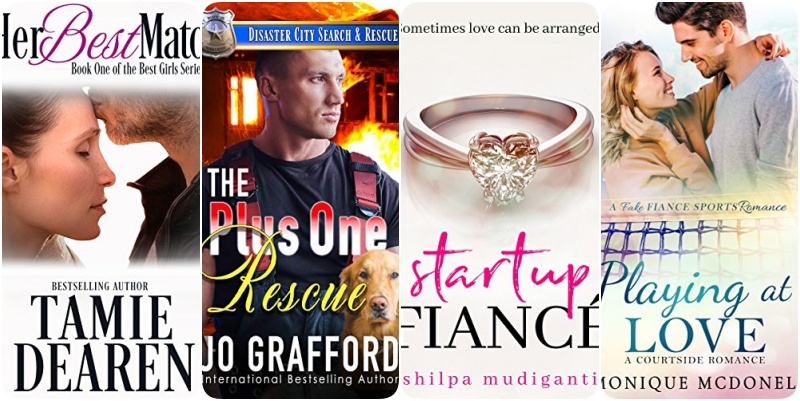 It’s all fun and games until someone falls in love…

Tennis star Kyle Samuels was a player both on and off the court. I grew up around men like him, work hard, play harder. But I had no time for his games, my reputation depended on saving his. As a top sports agent, I was no stranger to doing damage control. But being a fake fiancé, I was out of my league. Setting him straight wouldn’t be a problem… but falling for him might.

Sports agent Teagan Archer was all work and no play. The over-achieving daddy’s girl was also my new babysitter, I had no intention of making it easy on her. She’d thought she knew who I was, but she had no idea what it cost to be at the top. To stay at the top, we’d have to start playing together, instead of against each other.

Turns out I’m not just playing at love… I’m playing for keeps!

Sometimes Love Can Be Arranged.

Arav Shetty had it all. The handsome, self-made billionaire topped the list of New York’s most eligible bachelors and sat at the helm of the city’s biggest tech empire. He also had a plan – buy out the brilliant upstart nipping at his heels, and dominate as the biggest and best tech company in New York.

The strategy had worked for him in the past. He had the resources and skills to pull it off. And, he was determined to overcome his father’s dark legacy, and prove he had what it took to stay on top. Nothing would distract him from his goal. He’d buy out his biggest rival but the company’s owner, Nisha Jain wasn’t the pushover he believed.

Nisha Jain had a plan, too. Born with a silver spoon in her mouth, her early years had been a carefully scripted fairy tale. She was determined to make everyone sit up and notice when she achieved stupendous success – without her father’s money or brand influence. She knew she was on the right path when her biggest competitor wanted to meet with her.

But when they met, nothing went as planned.

Neither expected the instant spark of attraction, nor the hurtful words tossed around like confetti. With meddling family members and an arranged marriage thrown into the mix, the fate of both companies – and Arav and Nisha’s undeniable attraction – hung precariously. What was supposed to be a cakewalk became more complicated than either ever imagined.

Compromises needed to be made. But between a billionaire whose life work is on the line and an heiress out to prove her own worth, who would blink first?

With a heroic-sounding name like his, Axel Hammerstone naturally made all the “most likely to succeed” lists in his high school yearbook. So it comes as no surprise to his friends when their favorite defensive tackle player returns from Afghanistan with a Purple Heart for wounds sustained while saving a bunch of fellow soldiers during an ambush. He’s the only one who blames himself for the one man he failed to rescue during the ensuing explosion. Despite his own injuries, he’s determined to atone for the loss of his best friend and battle buddy by devoting the rest of his career to search and rescue operations.

Kristi Kimiko was first called the “dog whisperer” on her sixteenth birthday when she coaxed a wounded Boston Terrier from their burning apartment complex. Seven years later, she’s living her dream as an expert search and rescue trainer in Disaster City, Texas. Unfortunately, it leaves her little time for dating or any sort of social life, for that matter. When the hunky Axel half-limps and half-swaggers his way into her renowned dog training course with his beautiful golden retriever, she senses her life is about to change — especially after he somehow manages to coax her into serving as his Plus One at a big family birthday bash the following weekend.

If she’s learned anything in her line of work, where there’s smoke, there’s a fire; and this particular hunky firefighter has a way of making the sparks fly every time he looks in her direction!

Feisty, stubborn, and bored with life in Texas, Anne Best is about to get more than she bargained for.

The lovely widow heads off to the Big Apple for a job interview, expecting no more than a few days adventure in New York City, only to find herself with a new job working for the most infuriating man she’s ever met.

Billionaire Steven Gherring is one of New York’s Most Eligible Bachelors, and he has every intention of staying that way. But Gram has other ideas. She’s on a not-so-secret campaign to find a wife for her grandson.

As fearless as she is clumsy, Anne tackles every challenge (including her new boss) enthusiastically, with two lone exceptions… public speaking and recognizing her own feelings. Passions rise along with hemlines as Gram joins forces with Anne, a veteran matchmaker, to find the perfect match for Steven.